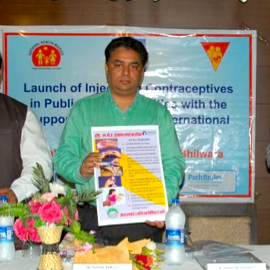 Rajasthan became the second state in India to provide injectable contraceptives (intramuscular DMPA) free of cost in 132 public health facilities on May 27, thanks to a public, private, and non-profit partnership. Injectable contraceptives are available at all levels of public health facilities –district hospitals, community health centers, rural and urban primary health centers, and soon at sub-centers. The state government initiated the injectables program as part of its commitment to improve access to quality family planning services and expand contraceptive choices available in the state.

Although the Government of India notified a plan for inclusion of injectable contraceptives in the national public health system in November 2016, the procurement of commodities and training of service providers is delayed.

First, a team from the Government of Rajasthan conducted a visit to Haryana in November 2016 to learn about the state’s experience with providing injectables. Based on the recommendations of the team, Rajasthan’s government decided to introduce intramuscular DMPA in one district across all levels of public health facilities.

The next challenge was to obtain the commodities. Pathfinder and the Rajasthan government engaged with Mylan Pharmaceuticals, an international leading specialty and generics pharmaceutical company, about providing a seed supply of injectable contraceptives to the NHM in Rajasthan. After sustained advocacy, in April 2017, Mylan Pharmaceuticals supplied 19,008 units (out of a committed 25,000 units worth US $68,061) of intramuscular DMPA to the NHM in Rajasthan.

After reviewing various indicators including the availability of providers, number of functional public health facilities, and presence of district leadership, the government decided to launch the injectables program as a pilot in the district of Bhilwara.

Supported by the Bhilwara district working group, advocates led the state to initiate capacity building for service providers and plan the roll-out of injectables service, which was not available in the public sector. Pathfinder provided technical and programmatic guidance to assist with the roll-out, including intramuscular DMPA injection training for 447 service providers. First, Pathfinder advocated for additional financial resources to support the training. Of the 300,000 Indian rupees ($4,667) needed for training, the state health department contributed one-third of the cost through reallocation of their unspent resources. Mylan Pharmaceuticals contributed the remainder.

Mr. Naveen Jain, Secretary to the State Department of Medical, Health, and Family Welfare, Rajasthan and Mission Director-National Health Mission officially launched the new service on May 27 in the presence of key district officials; Mr. Mathew Joseph, Country Representative, Pathfinder International; and other partner organizations in the district of Bhilwara, Rajasthan. Mr. Jain advised the health officials to communicate the benefits of the new method to eligible users in the community and ensure consistent supplies.

Going forward, as supply from the central government are only expected to partially meet the district needs, Pathfinder will support the state’s efforts in including intramuscular DMPA in the state’s Essential Drug List and procure additional supplies from their own funds.