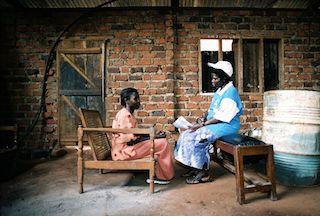 Advance Family Planning local partner Jhpiego Kenya advocated for its establishment so that local leaders could track uptake of the method.

The 2011 national policy that enabled community health volunteers (CHVs) to provide contraceptive injectables built upon on pilot work spearheaded in Tharaka Nithi. However, while the county excelled in implementing the policy, county officials had been slow to incorporate its results into the county’s existing monitoring and evaluation system or health management system.

In January 2016, Jhpiego and the USAID-funded APHIAplus Kamili (AIDS, Population and Health Integrated Assistance) program met with Dr. Walter Mugambi, County Chief Officer of Health, who sanctioned an analysis of CHV data records, tools, and the transmission system. He appointed a team, led by members of the county and sub-county health management officials, to oversee the analysis.

The data analysis team identified data quality gaps and discovered that CHV data was not being entered into DHIS2 health management system. The analysis showed that, between 2009 and 2016, 26,792 women received DMPA—19.5% for the first time and 80.5% as returning clients. County officials realized that by not capturing the data, they were failing to demonstrate family planning progress. Per the data analysis team’s recommendation, in October 2016, the county health management approved a CHV data monitoring mechanism to track and strengthen community-based distribution of DMPA.

In addition, in early 2017, Jhpiego advocated with Tharaka Nithi’s county health management team to deploy a CHV mobile-based data capture and transmission system and disaggregate data according to age in order to capture adolescent access to contraception.

The system was up and running as of May 2017. After attending to a client, CHVs are now able to transit real-time DMPA data via mobile phone. The data is then entered to DHIS2 by county record officers. The county department of health will continue to conduct regular reviews to address any emerging challenges and share experiences among the CHVs.

The table below shows how many DMPA injectable contraceptives were provided by community health workers between January to June 2017, according to the new system.

Jhpiego Kenya will continue to follow-up on contraceptive uptake in the county, especially by young people, and orient incoming leadership on the county’s family planning success following recent elections. They will also advocate for similar initiatives in other focus counties.