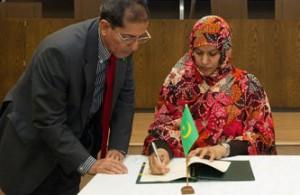 On October 6, 2016, the Council of Ministers of the government of Mauritania approved the text of a new Reproductive Health (RH) Bill submitted by the Minister of Health. This approval is a huge victory for advocates in Mauritania led by STOP SIDA, a recipient of financial and technical assistance from the Opportunity Fund.

The Opportunity Fund, managed by PAI with funding from AFP, is a small grants program that helps advocates seize opportunities to accelerate Family Planning 2020’s success at district, state, national, and regional levels.

The bill, if passed into law, will provides the legal framework for Mauritanian women to access information and reproductive health services, including modern contraceptive methods. It explicitly states that the right to reproductive health is a universal right guaranteed to all throughout the course of their lives. It also prohibits all forms of violence against women, including female gential mutilation.

Until the approval by the Council of Ministers, Mauritania was the only country of the Ouagadougou Partnership (OP) that did not have a RH Law, thus making it difficult for the government to deliver on its commitment to the Ouagadougou Partnership and Family Planning 2020 – as well as to the International Conference on Population and Development and other international agreements signed by the country in the past 20 years.

In a country that has as its name “the Islamic Republic of Mauritania” and where religion is present in every aspect of life, advocates were particularly careful to involve religious leaders in every step of the process. From the beginning, STOP SIDA promoted the creation of a multi-stakeholder committee in charge of producing a final draft of the bill and champion the approval process. The committee, headed by the National Program of Reproductive Health (NPRH), included influential imams, parliamentarians, government officials from key ministries, technical experts, and civil society representatives.  The success of STOP SIDA’s strategy also borrows from a close alliance with the Ministry of Health, the Ministry of Islamic Affairs, and the Ministry of Social Affairs and Women and Children Issues, in particular their respective legal departments as well as steady coordination with parliamentarians and journalists.

As a next step, the attention now turns to parliament, which needs to vote and pass the bill into law. In principle, the approval of the Council of Ministers and the ongoing work with parliamentarians bodes well for success at that level, too.