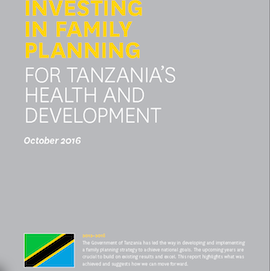 Update: View the latest version of Investing in Family Planning for Tanzania's Health and Development (October 2016), updated with data from the Tanzania Demographic and Health Survey 2015-16.

A new brief entitled Investing in Family Planning for Tanzania’s Health and Development highlights the Government of Tanzania’s tremendous commitment to family planning and achievements in addressing the population’s family planning needs since 2012. It also recommends next steps for policymakers to intensify efforts towards attaining family planning goals.

As of 2010, only one in three women used contraception (modern and traditional) in Tanzania. In 2012 at the London Summit on Family Planning, the government took action, making six political commitments with the goal of attaining a national contraceptive prevalence rate (CPR) of 60%. These commitments garnered the support of government representatives, members of Parliament, civil societies and non-governmental organizations, development partners, and the private sector.

The report captures significant achievements towards those commitments, including:

The brief affirms that in order “to meet its national family planning targets, Tanzania needs all levels of government, the private sector, and civil society to maintain strong commitment to ensure that the resources, commodities and systems are in place.” It recommends four main steps to continue progress.

The report is a joint effort by Health Promotion Tanzania and United Nations Association of Tanzania. View the report and recommendations online. For hard copies and more information, please contact: