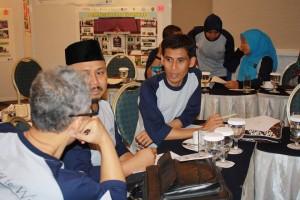 "We are not alone. We can learn from each other." -- Member of district working group in Tuban, East Java (and participant at the ICMM/AFP knowledge-sharing meeting)

Last month, the Advance Family Planning (AFP) Project and the Improving Contraceptive Method Mix (ICMM) Project in Indonesia co-hosted our first-ever knowledge-sharing meeting for district, provincial, and national level partners. The two-day meeting was conducted and facilitated by ICMM/AFP partner Yayasan Cipta Cara Padu (YCCP), who brought more than 70 individuals from the district, provincial, and national level together in Jakarta. YCCP leads advocacy efforts for the two projects, which both use the AFP approach to advocate for increased funding and support for family planning at the district level.

The meeting theme—“Partnering to Win”—highlighted the importance of collaboration and learning in order to improve district-level family planning advocacy efforts and make strides towards meeting millennium development goals (MDGs) and FP2020 goals. Participants included representatives from all the six ICMM district working groups (Kediri, Lumajang, Tuban, East Lombok, Sumbawa, and West Lombok), all five AFP district working groups (Bandung, Bogor, Karawang, Karanganyar, and Pontianak), provincial-level district health offices (from East Java and West Nusa Tenggara), provincial-level BKKBN offices (Population and Family Planning Board), the Family Planning Body of East Java, BKKBN Central Office, the University of Indonesia, the Ministry of Home Affairs, and the Ministry of Health. Several staff from Johns Hopkins Center for Communication Programs (including myself) and the Bill & Melinda Gates Institute for Population and Reproductive Health at the Johns Hopkins Bloomberg School of Public Health also attended. The event provided an excellent platform for all partners to learn from each other’s challenges and successes.

A highlight of the meeting was hearing about the poster presentations. Posters were displayed along one wall of the meeting space, and each of the eleven districts had the opportunity to present their poster to the larger group. The posters described “quick wins” towards the goal of increasing funding for family planning, specifically long-acting and permanent methods, at the district level. As the project manager for ICMM, I was already familiar with the basic advocacy approach and overall challenges; however, the posters described in detail the roadblocks, facilitators, and decision-making processes each district experienced. These sorts of nuances are difficult to get across in a traditional project report, which was why this meeting proved so meaningful to me, and to the participants. In addition the question and answer sessions evolved into “problem-solving sessions” for each district, which proved invaluable for the project. Working group members could then go back to their community-level teams and share ideas from other districts.

The posters presented a number of important successes—and shared the challenges and hurdles each district team faced along the way. For example, the Lombok Barat and Lombok Timur working groups were able to influence the District Mayors to sign an endorsement letter instructing village heads to allocate IDR 500,000 (US $50) per village per year in their 2015 village budgets for family planning activities. This applies to all 254 villages in Lombok Timur and 119 villages in Lombok Barat. The endorsement letter has already led to increased funding at the village level. As the district working groups (DWGs) are also working with midwives, religious leaders, and others to increase demand, these efforts are expected to translate into increased use of long-acting and permanent methods of contraception.

This is just one example of the successes highlighted during the two-day knowledge-sharing meeting. While each DWG reported on distinct challenges, a number of common themes also arose. In addition, the effectiveness of the AFP-Indonesia approach—which includes training in cost projection, the AFP SMART approach, and the Net-Mapping tool—was widely acknowledged. In fact, BKKBN’s provincial office in East Java presented their plan to scale up the approach in 38 districts during 2015, based on the documented success of the approach by the AFP and ICMM Projects.
Interspersed with the poster presentations, representatives from the Ministry of Health, BKKBN (the National Population and Family Planning Board), the national midwives association, and other national-level stakeholders gave overviews of relevant topics and offered guidance from the national perspective. For example, Dr. Julianto Witjaksono of BKKBN presented on Indonesia’s new Universal Health Coverage program (Jaminan Kesehatan Nasional, or JKN) and how it affects family planning provision at the community level. On the second day, the district stakeholders came together to review the AFP SMART approach, and had the opportunity to meet in their district teams to begin planning their annual work plan activities for 2014-2015. The YCCP team provided technical assistance during this process, as did provincial and national level representatives from the MOH, BKKBN, and other groups.

For health professionals working at the community level, it can be difficult to find time to meet with others doing similar work—those who often face comparable challenges and can offer advice and help develop solutions. It can also be difficult to see the larger picture—and certain challenges can seem impossible to overcome. Stepping outside one’s day-to-day routine, sharing challenges with others in similar positions, and soliciting advice from peers can provide inspiration and help them solve problems that can be bottlenecks in their own situations. Electronic mediums—such as online forums, email lists, and social media—can serve an important purpose and make connections among members of communities of practice. Oftentimes, though, connectivity issues prevent individuals from actually using these tools. Also, particularly in certain cultures, face-to-face discussions can often be more effective when it comes to sharing the nuances and everyday challenges.

While this knowledge-sharing meeting provided an important opportunity for learning and improvement of district-level advocacy plans, it was also fun and engaging. Participants shared songs, photos, and stories about their experiences working in family planning. They came with open minds, and left with new ideas that can help them through their everyday challenges.

More information about AFP and ICMM in Indonesia:

Since its inception in 2009, AFP has been working closely with the national and subnational governments in Indonesia to increase the overall use of family planning, especially long-acting and permanent methods (LAPMs). The project also works to ensure that women are able to use the method of their choice. The AFP-Indonesia advocacy model leverages district working groups (DWGs) and trains them on cost projection, Net-Mapping, and the AFP SMART approach in order to set targets and increase funding and support for family planning, particularly LAPMs. This particular model has been replicated in the Improving Contraceptive Method Mix (ICMM) Project, which is implemented by K4Health in partnership with AFP, the University of Indonesia, the Cipta Cara Padu Foundation, the Ministry of Health, and BKKBN.

AFP began at the Bill & Melinda Gates Institute for Population and Reproductive Health, Johns Hopkins Bloomberg School of Public Health, with the leadership and support of the Bill & Melinda Gates Foundation, the David & Lucile Packard Foundation, and The William and Flora Hewlett Foundation. ICMM is funded by USAID and the Australian Department of Foreign Affairs and Trade (DFAT) and implemented by the Johns Hopkins Center for Communication Programs. ICMM also includes operations research activities to test the advocacy approach, as well as a strong knowledge management component, which is led by K4Health.