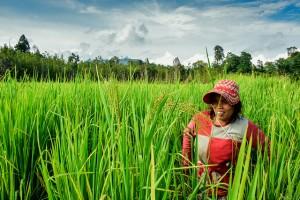 In June 2017, Indonesia’s provincial government of West Kalimantan allocated IDR 470 million (US $35,300) of its own funds to scale up 14 family planning advocacy district working groups in 2018—12 of which are newly formed. This win for sustainable, locally-funded advocacy builds on years of efforts to improve information and services for couples in West Kalimantan.

In the lead up to the commitment, the provincial government allocated IDR 100 million (US $7,500) to convene a Family Planning Coordination Meeting. The West Kalimantan provincial working group and representatives from the 14 district working groups attended the meeting on May 3rd. In an opening speech, West Kalimantan Governor Cornelis stated that he hoped the reformative programs will draw many benefits, including increased community welfare. The Governor, a family planning champion, decreed the provincial working group as an official government body last year..

Kapuas Hulu District Vice Head Antonius Pamero affirmed their district working group’s positive impact on family planning. He noted the significantly improved commitment and cooperation between stakeholders, resulting in stronger family planning programs. Moreover, the Indonesian Social and Economic Survey (SUSENAS) indicated that long acting permanent method (LAPM) use in Kapuas Hulu increased from 3.36% in 2015 to 5.29% in 2016. LAPM use in Bengkayang also increased: from 5.35% in 2014 to 8.85% in 2016.